Tour to the monasteries of Meteora in Greece

A two-day tour to the greatest shrine and one of the most unique wonders of the world on the planet!

The monastery complex of 6 existing monasteries located on the tops of the rocks, is considered the most significant center of Orthodoxy and icon painting on the planet after Mount Athos. The monastic state was educated around the 10th century and at the end of the 20th century monasteries were included in the UNESCO World Heritage List. During this tour, we will have a unique opportunity to visit all 4 male monasteries - The Great Meteoron, the monastery of Varlaam, the Monastery of St. Nicholas Anapavsas, the monastery of the Holy Trinity, and 2 female - the monasteries of Rusanu and of St. Stephen.

Detailed information of the tour to the monasteries of Meteora

Trip to Meteora on the map

Information about the monasteries 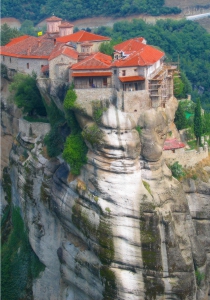 The Great Meteoron (Monastery of the Transfiguration of Christ) is the highest, largest and oldest of the 6 others monasteries of Meteora. Founded in the 14th century the Great Meteoron still impresses with its greatness. Here is a rich and valuable collection of manuscripts, icons and holy relics. The Great Meteoron was founded around 1340 by a learned monk from Mount Athos, St. Athanasios Meteor. He climbed the highest mountain, which he called "Megalo Meteoro" (Great place hanging in the air). He first built a small church and modest dwellings for the monks. 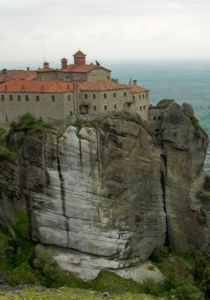 It is an active nunnery in Meteora, storing an important relic of the Holy Haralampy, protecting against illnesses and diseases. The monastery of St. Stephen is the richest of Meteor monasteries. It is located on a huge rock, towering over the city of Kalambaka. This is the easiest to visit the monastery, the entrance to which is carried out on a single pedestrian eight-meter bridge. During the 20th century the monastery suffered a lot of suffering: during the Second World War, it was subjected to destructive bombardment, and then, to desecrations during the civil war. Later, many frescoes were ruined by communist insurgents. The monastery of St. Stephen was actually abandoned until 1961, before becoming a nunnery. Currently, 28 nuns are permanently residing on its territory. 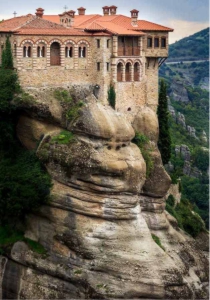 Founded in the beginning of the 14th century, the Monastery of St. Nicholas Anapavsas is distinguished for its unique design and magnificent frescoes of the 16th century, made by the outstanding icon painter of the Cretan school Feofan Strelidzas. Imagining such scenes as "Passion and Christ", the Virgin Mary's prayer, the Liturgy of the Angels and the Last Judgment, the murals demonstrate the characteristics through which Feofan became famous: the fineness of the line, the brightness of the image and the bright colors. A small area of ​​the rock, on which the monastery is located, forced the monks to place temples, cells and outbuildings on several levels, which creates the impression of a labyrinth. On the first level of the monastery is a tiny chapel of St. Anthony, containing earlier frescoes of the 14th century, a crypt used to store relics and manuscripts. Its altar has an area of ​​only 4 square meters and can accommodate only one cleric. 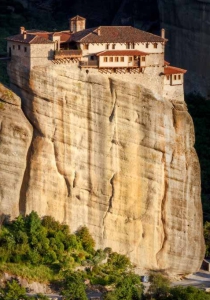 A functioning nunnery with a nice and cozy patio, you can get into it through a new bridge. The monastery of Rusanu stands on a relatively low rock and is easily reached through a bridge built of wood in 1868 and replaced in 1930 by a bridge of more durable material. Despite this its location is quite impressive as it is surrounded on all sides by sharp cliffs. The monastery covers the entire surface of the plane of the rock and consists of 3 levels: The church and cells are located on the first level, and the other two levels are living quarters, an entrance hall, an exhibition hall and additional cells. The monastery was repeatedly plundered. Those relics that have survived to this day are now preserved in the Transfiguration Monastery (the Great Meteoron).

The monastery of Varlaam is named after the monk who first built a tiny chapel on the cape of the cliff in the 14th century. According to the story, in 1350 the ascetic monk rose and settled on the very top of this rock. He built a church which he dedicated to the Three Saints, a cell for himself and a tank for water. But no one else followed his example, and after the death of Varlaam this place was abandoned. For 200 years of oblivion everything turned into ruins, and in 1517 the two rich brothers priest-monk Feofan and Nektarios from Ioannina raised to the top and found a monastery there. They repaired the church of Varlaam, built a tower and Katholikon (1541-42), designed for All Saints. Using a rope, the basket took 22 years to lift all the building materials to the top. After all the materials were raised, the construction itself took only 20 days. 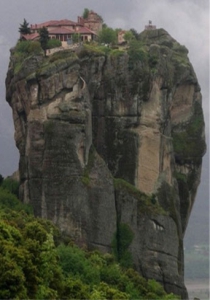 Located at the top of one of the most picturesque rocks of Meteora. To reach the top of this rock you can only 140 steep steps, which however makes it the quietest and most peaceful monastery because not everyone is able to withstand such physical exertion. The monastery of the Holy Trinity is a monastery inhabited and supported by only a few monks which creates a unique atmosphere of asceticism and unity with God and nature. Probably monks - hermits lived here in the beginning of the 14th century, but a real monastery was built in the period 1458-1476. Until the 20th century monks and pilgrims as well as food reached the monastery in only one way: a tight rope and a basket. But in 1925 in the rock were cut through 140 steps which following the path at the foot of the rock lead to the monastery.